Having enjoyed Michigan’s Lake Superior so much, we were ready to expand our horizons even further. A quick peek at the map and we realized we were just a hop, skip, and a road-trip away from checking out some of Canada’s finest cities. Hello, Great North!

After reading other RVers’ accounts of their experiences crossing the Canadian border, we weren’t quite sure of what to expect in terms of reception. Some folks reported being questioned repeatedly about the possession of firearms and even having their vehicles thoroughly searched, while others recalled being waved right through without issue.

If you’re planning your own visit to the great north, check the U.S. Customs & Border Patrol and the Canada Border Services Agency for information online about what to bring with you. For our part, we were prepared to present our passports, pets’ rabies certificates & vaccine records, a list of items to declare, a written travel itinerary, and our vehicle’s insurance and registration information. This seemed like a bit of overkill, even to us, but it was our first time crossing a national border with our bus, so we figured, hey, best to over-prepare, right?

I’m happy to say that our experience at the Canadian border was straightforward and painless. The border agent reviewed our passports, pets’ rabies certificates, and travel itinerary. We were each asked what we did for a living and then asked to confirm that we weren’t seeking employment in Canada. The whole process took just a few minutes and then we were on our way to exploring Onatario!

Upon entering Canada, we were reminded that the metric system exists and is widely used, by, oh, everyone else in the world. To keep ourselves from getting a speeding ticket we made an impromptu upgrade to our speedometer by adding km/hour to the interface with dry-erase marker.

One thing that struck us about driving the major highways in Canada was the surprisingly cutthroat behavior of many other drivers. As drivers of a large vehicle, albeit a fairly friendly looking one, we’re used to folks being pretty accommodating about letting us merge into traffic and not trying to cut us off.  Unfortunately, we noticed a-few-too-many-for-comfort examples of these questionable and in a few instances, potentially dangerous, driving behaviors while on the roads in Canada.

Once in Canada, we figured, why not continue our trend and see another one of the Great Lakes? With this in mind, we decided to check out the coast of Lake Erie. We picked Long Point Provincial Park in southern Ontario based on online reviews and pictures showing gorgeous sandy beaches. It looked perfect on-screen. Though the beach is nice, this campsite turned out to be our nightmare: super crowded campground with tightly packed sites offering no privacy compounded by hordes of loud, screaming children riding around on bicycles. Oh, and we were mobbed by mosquitoes & flies during our stay. (Can you tell I was grumpy about this place?)

Perhaps, I’m not being fair. This was our first experience with the equivalent of  a Canadian state park during the peak camping season. We might have had a much different first impression with different timing and a less in-demand park.

Toronto has a reputation as a kick-ass city for a lot of reasons and we were eager to find out more about this town. Like most major metropolitan areas, there weren’t many campground options in the heart of the city itself, and we decided on Indian Line Conservation Area in Brampton. Technically, Brampton is a separate municipality, but it struck me as being akin to one of the burrows of New York City (maybe Queens?) that are enmeshed within the larger metropolis, but still have their own unique character.

Staying at Indian Line gave us a relatively convenient spot from which to explore the city of Toronto. From the campground, it was a ~25 minute bike ride to the Malton Metro Station, followed by a 35 minute train ride into downtown Toronto. Once in Toronto, we did a lot of the popular tourist things: ate lunch at Saint Lawrence Market, a strolled through the grounds of Saint James Cathedral, perused street vendors’ wares in Chinatown, and explored the many vintage shops and grafiti-art-covered alley-ways of Kensington Market. Oh, and we stumbled on an awesome two-story fabric store on King’s Street! (Okay, I was the only one excited about that last part.)

From what we saw, Toronto has a lot to offer and the similarities with NYC were obvious. However, by the end of our visit Ryan was itching to get out of the big city. (You can take the boy out of the country….) 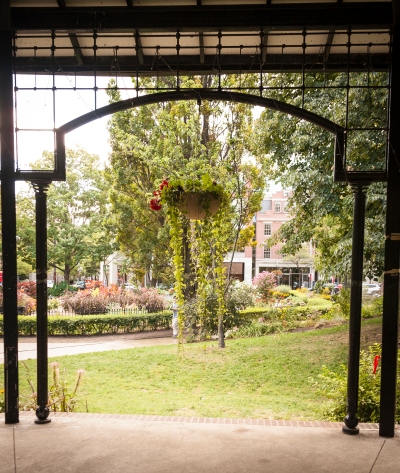 The park at St. James Cathedral

This was Ryan’s favorite mural in Kensington Market

Seeing the Northern Lights first hand has long been on Ryan’s bucket list (heck, he even designed a whole android app around them), so when he heard about a popular stargazing spot via amateur astronomy forums, we jumped at the chance to visit.

Irvine Lake Airstrip, near Bon Echo Provincial Park,ON is an abandoned airstrip that is open to the public for dirbiking, stargazing, and camping. To get to the airstrip we turned off the highway and followed dirt roads that proved, for the most part, easy enough driving. Until the end of the road. There was a steep uphill right at the turn-off for the airstrip that was partially washed out on one side. We nearly didn’t make it past this point, but were thankfully able to manage enough traction to pull us through.

The first night we parked right in the middle of the tarmac. There was no one else around and it admittedly felt a bit spooky being there until a car load of fellow star-gazers showed up and put us at ease with their friendliness. They assured us that camping there wasn’t uncommon and informed us (much to our chagrin) that we had just missed a regional star-party by a few days. On our next night, we decided to park in a more secluded part of the airstrip, and felt comfortable staying there.

Fortunately, the conditions were favorable and we were able to see the Northern Lights two full nights in row! 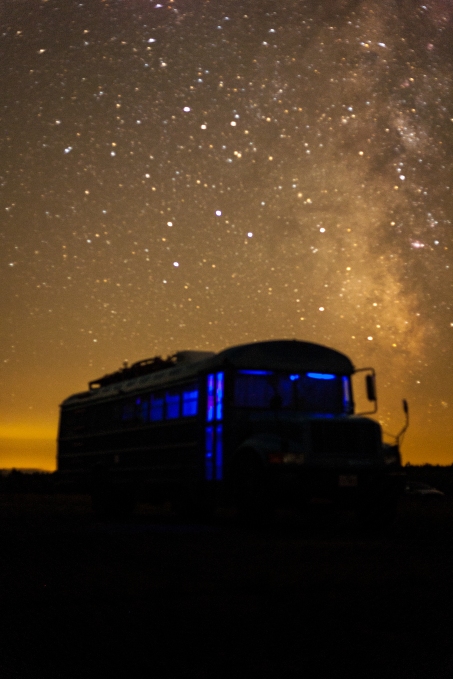 The lights were greenish the first night. 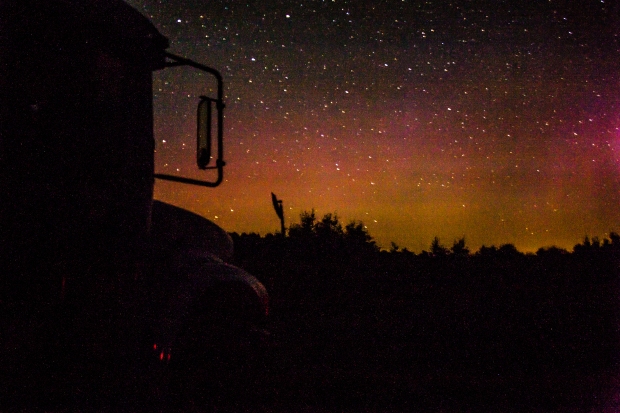 Our campsite the second night.

Canadian mornings are cold even in summer.

To be honest, we didn’t know much about Ottawa before we visited. Sure, we knew it is Canada’s capital city, but mostly we knew it was on our way to Montreal. Though we went into our visit thinking of the city as a stop-over before taking on Montreal,  we ended up having a great time in Ottawa.

We were able to snag a spot for the night at Rideau Heights Campground which turned out to be a good pick. The campground is older, but the facilities were well maintained and clean. Most importantly, we felt comfortable leaving the bus parked here while going out & sightseeing.

After getting set-up at our site and making sure the pets would be comfortable in our absence, we hopped on our bikes for a relaxing 9-mile ride into downtown. Ottawa has extensive bike paths (and flat, we especially liked how flat they were) lining it’s canals which made getting to and from the city center simple and scenic.

Once downtown, we visited Level One, a fun pub that boasts an extensive two-story library of board games, a video game lounge featuring both new and old-school consoles, and a full bar & menu. A few new board games, some burgers & beers, and a few rounds of Mario Kart later and we were happy campers.

Following dinner, we decided to head over to a Hitchhikers’ Guide to the Galaxy themed bar called Zaphod Beeblebrox, mostly so Ryan could add drinking a Pan Galactic Gargleblaster to his list of life accomplishments. (The Gargleblasters were appropriately awful tasting by the way.)

All in all, the vibe we picked up from Ottawa struck us as being pleasantly similar to our most recent home-base of Austin, TX. 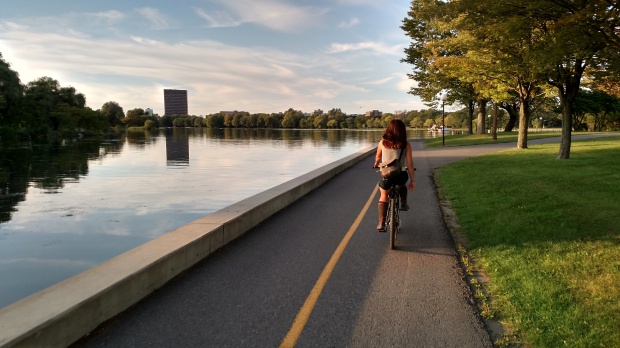 The Night Club at the Edge of the Universe

The Pan Galactic Gargleblaster & the Slartibartfast

And so concluded our tour of Ontario. Keep an eye out for Part II of this travelogue recounting our experiences in Quebec!